Sunday, August 31, 1986
After Kyle and I went to Mass, we had lunch and Kent took the boys to their mom’s, and she would take them to the beach at Bonnet Shores where they have rented a cabana for the summer. There we would have Erich’s birthday party. We left at 14:00 to drive down to Bonnet Shores, stopping to purchase a piñata for the party. We arrived at 16:00 to show our pass to get in.

Walked down to the rocks with Kyle, then did some sitting around. Eventually had dinner of hot dogs or hamburgers with the usual accoutrements and cold pasta salad. The carrot cake had a boat followed by a shark fin on it, and there were Hoodsie ice cream cups.
Erich tore through the gifts and then it was time for the piñata.
The kids went to play ball as the adults had coffee. We left about 19:30.

Saturday, August 30, 1986
Kent had the BIF Golf Tournament today in Foster, RI, a new and difficult course for him. I did a thorough housecleaning, then drove to Wickford, RI on this cool (70 degrees) and sunny day. Walked around to window shop and take pictures.
At the harbor I saw a quahogger at work.
Saw some nice front doors on the old colonial homes. 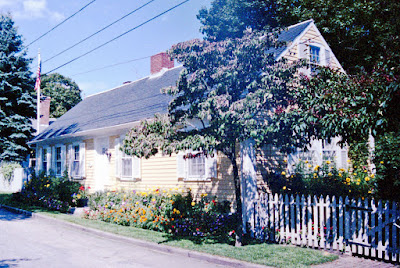 Went down Gold Street to see the Kane family homes, and saw an elegant reception in someone’s backyard. I felt like the paparazzi! (Paparazza?)
When I got home, I got a call from Donna P who had PawSox tickets which I went to pick up and got a tour of her house! Kent came home with Kyle and Erich shortly after 18:00. We quickly ate the veggie stew and biscuits I had made, and drove to McCoy Stadium. I was dropped off to exchange the tickets, only able to get General Admission.
I waited a long time for Kent who had to park several blocks away and had trouble with his car alarm. We missed the anthem and first pitch, but found seats way in the back behind home plate. A fairly exciting game with home runs by John Christiansen and Todd Benzinger. The boys got popcorn. We left at the bottom of the seventh inning because it was so late.
Posted by Jax Stumpes at 11:30 PM No comments:

Sunday, August 17, 1986
Made banana bread from very ripe bananas before going to Mass. Had an early lunch, then drove to N Kingston for the Quonset Airshow. It was overcast as we drove around the area looking for a place to park. Finally decided to pay the money and go up close. As we joined the line, we saw a couple parachutists in the distance, then three planes flying in formation with one daredevil plane.
The guy selling the tickets made sure we realized that both Kyle and Erich were under five years old in order to pay the minimum of $1 each. Kent and I couldn’t pass, so we had to pay $6 each. After parking we had a long roundabout walk to the airfield. An F-16 took off to roar around and show off its capabilities as it flew ahead of its sound. We checked out the helicopters, private planes, and cargo planes that were on display, as a father-son stunt team did their thing above us, often seeming to head straight at each other. Some unidentified plane arrived to fly around to “Avenger” music. Kyle and Erich spent their $2 each of allowance savings on buttons with a rabbit foot keychain.
A larger F-14 zoomed around, later to fly in formation with a little prop plane, one going its fastest and one its slowest. We went to look at more planes and a cargo helicopter as the Bud Light stuntman swooped around and did spins that looked out of control. Next were the Guardian Angels team of parachutists, with their gold and black guidable parachutes that they could steer to land on a target. One guy had a regular (round and white!) parachute that he deployed to show that they each had a second reserve parachute. The finale for us was to see four parachutists stand on each other’s shoulders.
It was about 16:00 and we had been standing for about three hours (except Erich who sat and would lie down whenever he could). We left although the show went on, and even though the weather was holding out after the initial sprinkles when we arrived.
At home we had a cookout and played badminton before taking the kids to their mom’s.

Saturday, August 23, 1986
After lunch we went to Westport, MA to look for the Water Slide Park, which we found on US-6. All the boys got tickets for $4.50 for seven rides on the curvy Flume slides. The Lightning Bolt straight slides were six rides for $3.50. It was sunny but cool, and we thought this would be better than the beach, but it made them colder. Kent stopped after six slides.
We tried Cue Ball, with 18 mini billiards tables set up in a mini golf type course. The narrow bumper pool tables were not truly flat, but it was fun trying. Each spot had a white chalk mound for hands, and pink for the cure sticks. We each had our own ball. We didn’t keep score.
We drove home via a couple vegetable stands.

Saturday, August 2, 1986
The sky looked very iffy with big gray clouds, but we decided to go ahead to Goosewing. It turned out to be a great beach day, as we paid our $7, and were one of the first to arrive. We saw Pam and Wayne there, preparing for Wayne’s company picnic. There was a beached boat on the beach, just a hull.
The lifeguards were cleaning up loose boards and some guys were trying to free the rudder and propeller. Kent pulled off the license plate.
After lunch the boys went off to paddle the raft in an inlet.
They came back announcing there were crabs to be caught. I took my camera, and sure enough, you could see them scuttling through the water.
Later we built a sand castle, then headed home at 15:00.
After dinner we walked to Newport Creamery. Kent and I had Fudgsicle-like maple fudge ice cream, and the kids got Awful Awfuls, Junior ones.