Sunday, April 24, 2016
Today's hike along the old Ohio & Erie Canal was from Deep Lock Quarry to Lock 27, and turned out to be the wildflower hike. What is a wildflower and what is a weed? A weed is any plant that is where it is not wanted, so usually a non-native invasive plant. A wildflower is usually a native plant.

Saturday, April 23, 2016
After the Edgewater Park hike, we drove farther west into the Edgewater neighborhood of Cleveland, with century-old mansions of the wealthy who sought waterfront property along Lake Erie.
There were variations in landscape style.
(Check out the link mentioned in the comment below!)
The occupants of the car got out and went into a corner yard, which we discovered was the Dr Gerard & Phyllis Seltzer Sculpture Garden Trust. We had to take a look as well.
Dr and Mrs Seltzer are major art patrons and continue to be donors to the Cleveland Museum of Art.
Posted by Jax Stumpes at 11:30 PM 2 comments:

Saturday, April 23, 2016
A detour from the Edgewater Park hike took us into the Edgewater Hill section of the Detroit Shoreway neighborhood of Cleveland, to see the Blue Birds. Edgewater Hill has access to Edgewater Park and is also on the Atlantic Flyway as a rest stop for migrating birds. For a sense of neighborhood identity, the Blue Bird Project installed 35 blue bird sculptures on utility poles, trees, homes, and commercial buildings in 2007. The project was designed by Mark Reigelman II.
There is even a map to locate all the blue birds, but we did not find four of them! 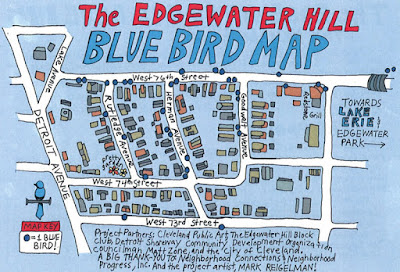 Battery Park is part of Edgewater Hill and is the largest housing development in Cleveland. This urban renewal project was built on the site of the Eveready Battery Company plant, and the powerhouse remains as a community center with retail shops.
Remember that Herman Avenue was also titled Kilbane Town. Johnny Kilbane lived here beginning in 1910. In 1912 he won the world featherweight boxing championship, and then participated in the longest and largest St Patrick's Day parade in Cleveland history the parade ended W 74th Street near Herman Avenue. He was later to serve a term as State Senator.
Back through the 76th Street "subway" to Edgewater Park.
Posted by Jax Stumpes at 11:00 PM No comments: