Sunday, June 20, 2010
Father's Day
After a lunch at Yummy Sushi with friends and their very cute 3-month old baby, we decided to do the "Treasure Quest" sponsored by our metropolitan newspaper. Big clouds covered the sun and we thought it would be bearable in 98-degree weather. Ha! At first thunder rumbled and we were afraid of being rained upon. But it cleared somewhat and the sun beat down.
Fortunately, the Treasure Quest was a short walk on the Northbank Riverwalk in the city of Jacksonville. And you will see how we are intellectually challenged here in the South. We had to solve 10 riddles based on our knowledge of the "Toy Story" movies and following a map. We parked at the Times-Union building and went through a gate to the Riverwalk.

Our first clue:
Take a break and rest for a while
Read the paper, you're sure to smile
Name the guy flying
Or at least trying
He's really just falling in style.

Along a ramp, we found a bench with copies of old newspapers behind it. The closest thing to a man flying was an off-balance baseball player, but he was too blurry to identify. We wrote down the date of the paper, thinking to research who that player might be. However, the next bench was marked with a "Treasure Quest" sign; we knew the answer had to be here. 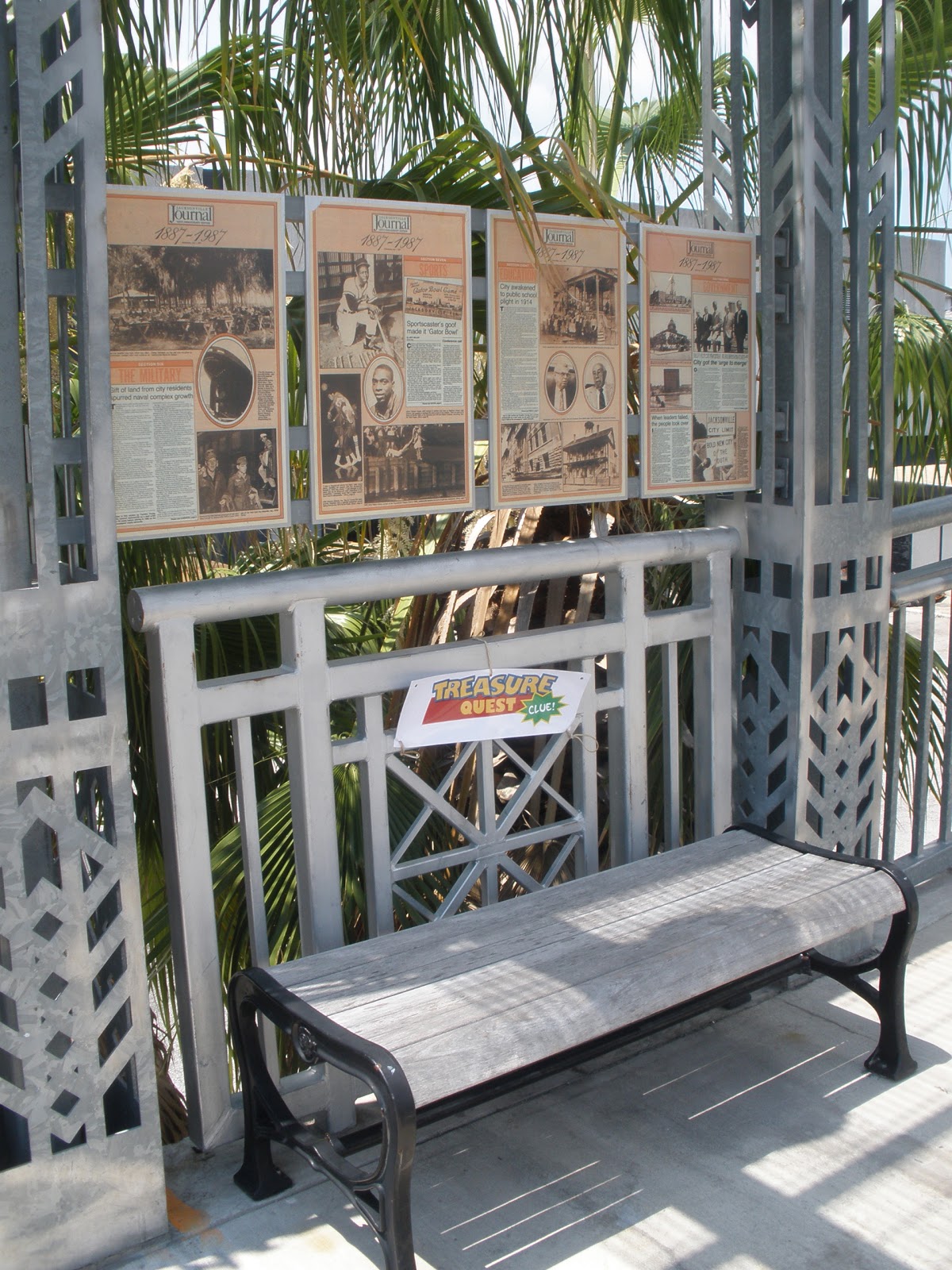 The photo showed Jerry Pate celebrating his Tournament Players Championship victory in 1982 by diving into the lake. 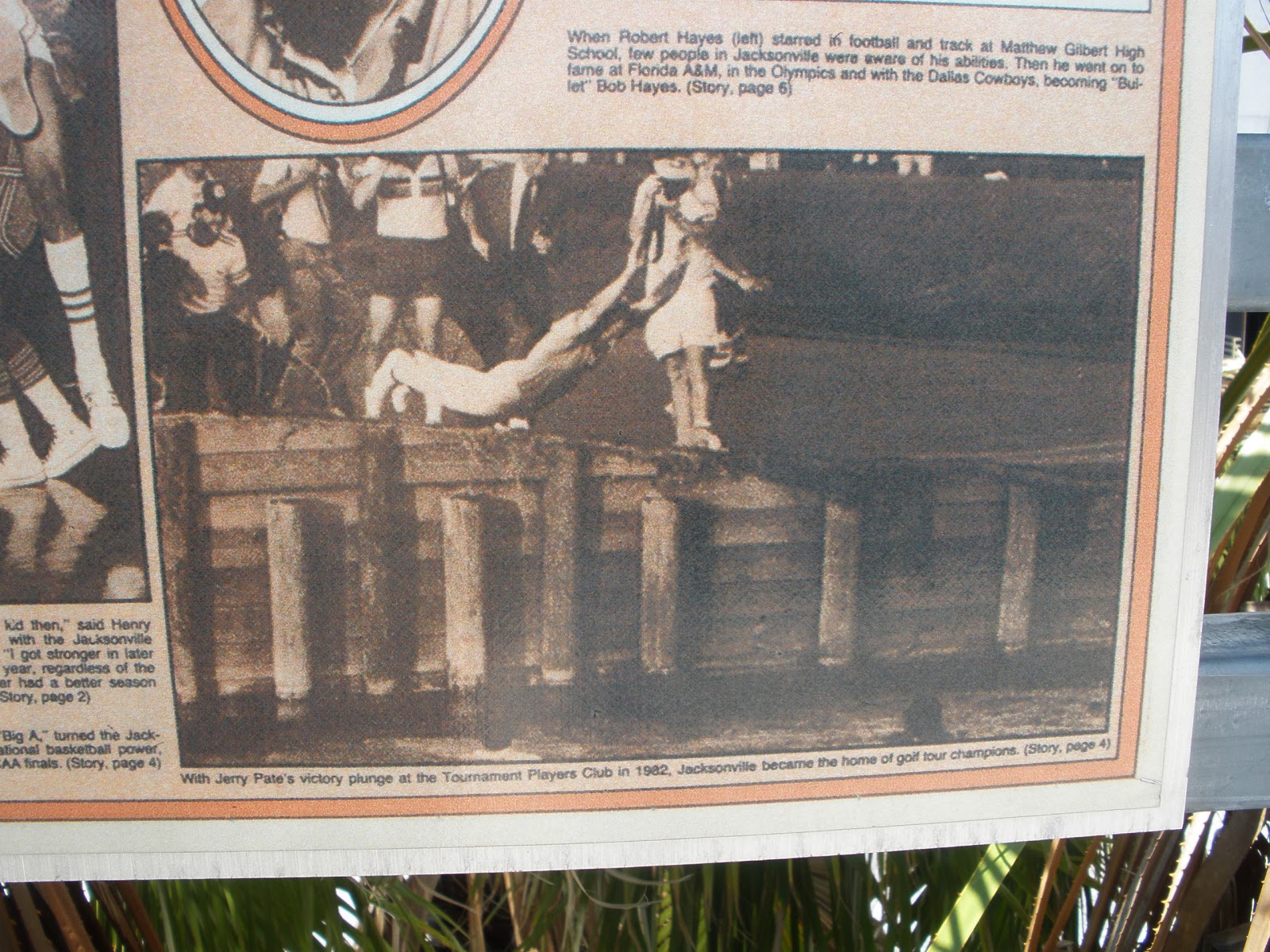 Clue number two:
Buzz has a laser (in his dreams)
Not a blinking light, as it seems
Down below your shoes
The bridge for choo choos
Is made of what sort of beams?

The ramp took us over the FEC Strauss Trunnion Bascule Bridge, the CSX railroad bridge next to the Accosta Bridge. Iron or steel beams? Sure was rusty! 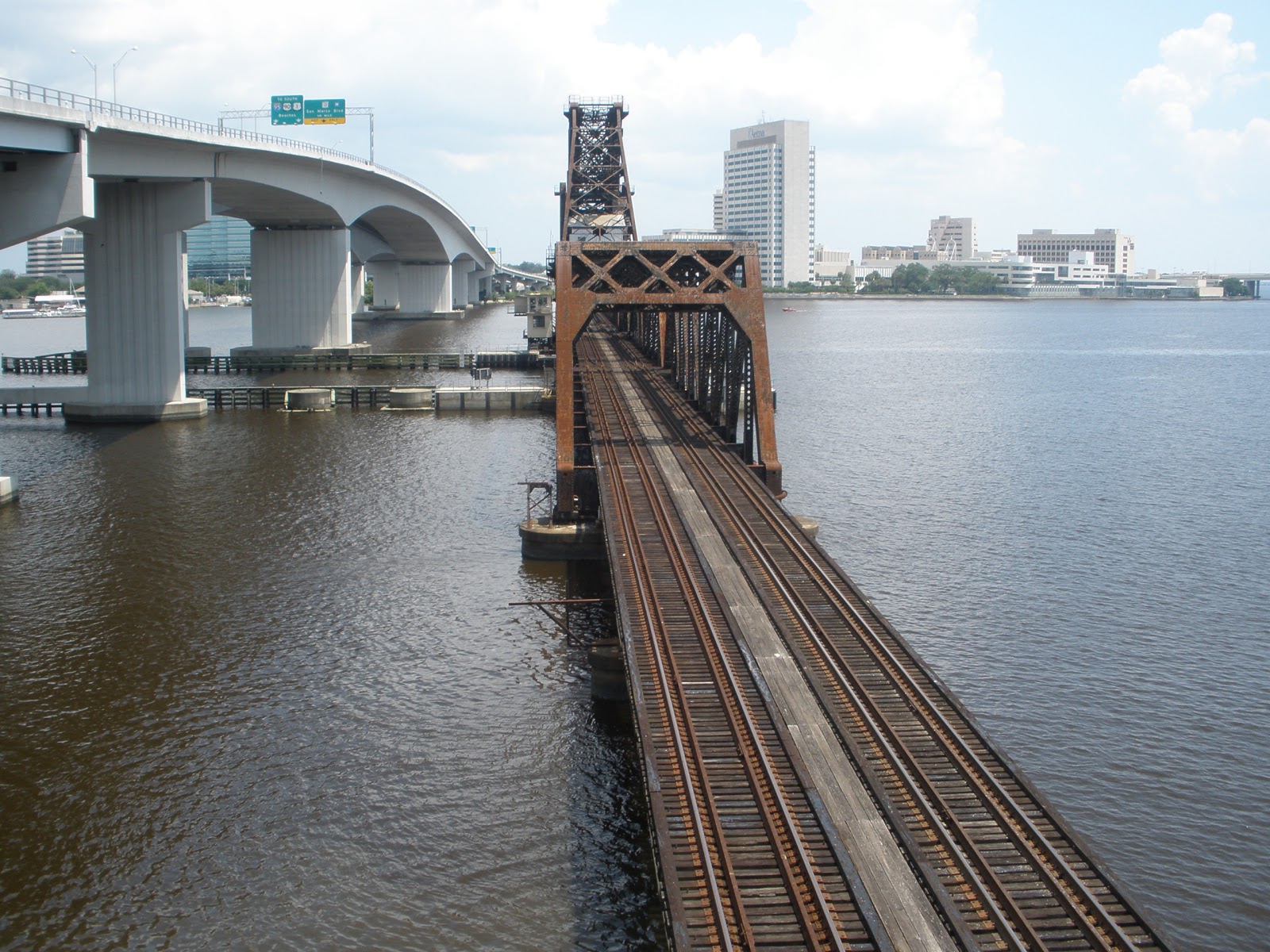 You like challenges? Oh, we got 'em.
Check your shoes, better double-knot 'em
Now go and get busy
But don't get too dizzy
How many turns before the bottom?

After passing over the railroad bridge, the path headed down a series ramps, where we made 10 right turns underneath the Acosta Bridge. 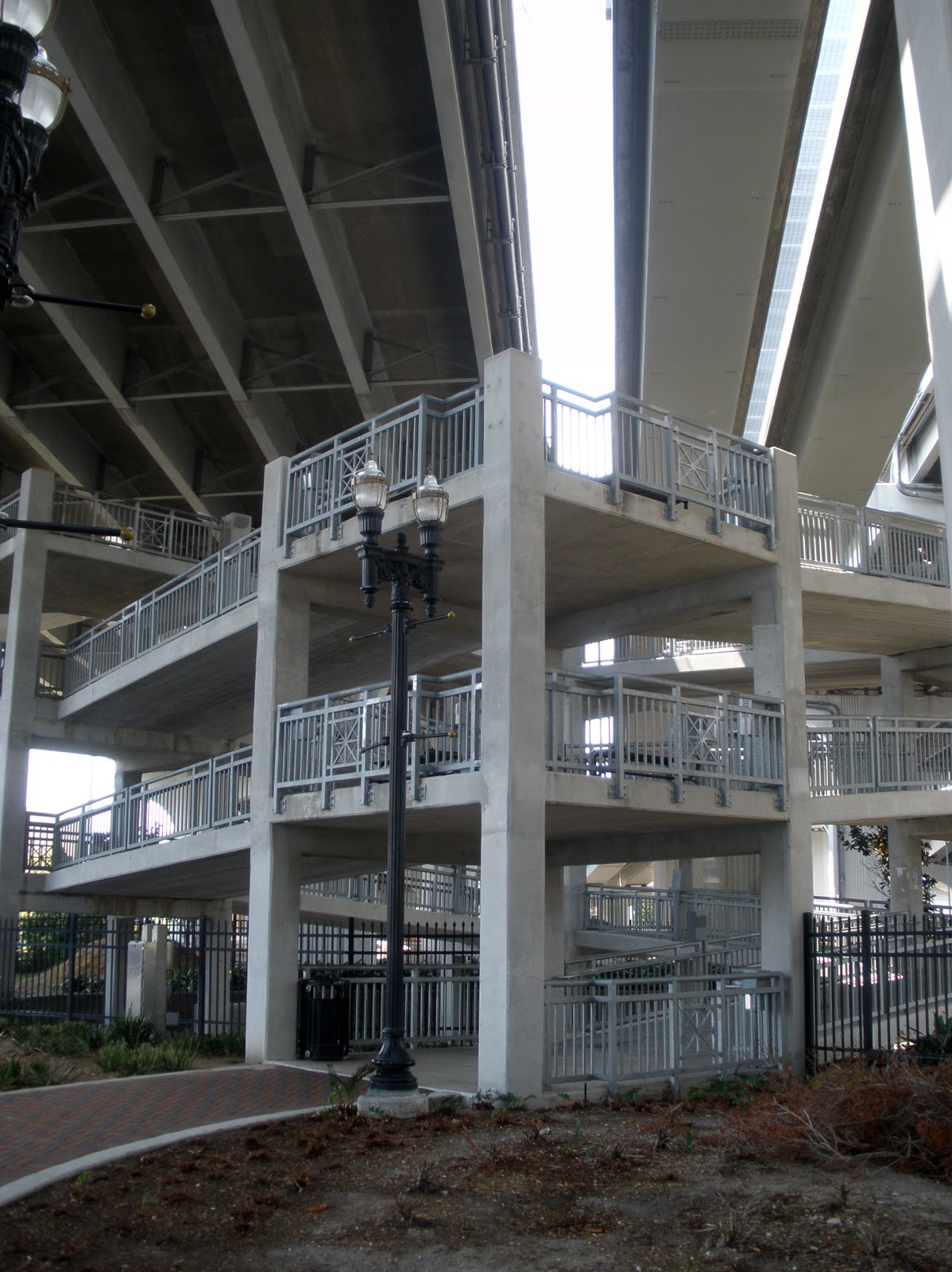 Clue number four:
Stop for a bit and look straight down
You'll see something that's metal and round
Bulleye's kin is shown
But what isn't known
Is how many hoofs on the ground?

If you didn't know you were looking for a manhole cover, one of those "Treasure Quest" signs marked the spot! The graphic of the Andrew Jackson statue has his horse (Bullseye is Sheriff Woody's horse) rearing on 2 hind legs. 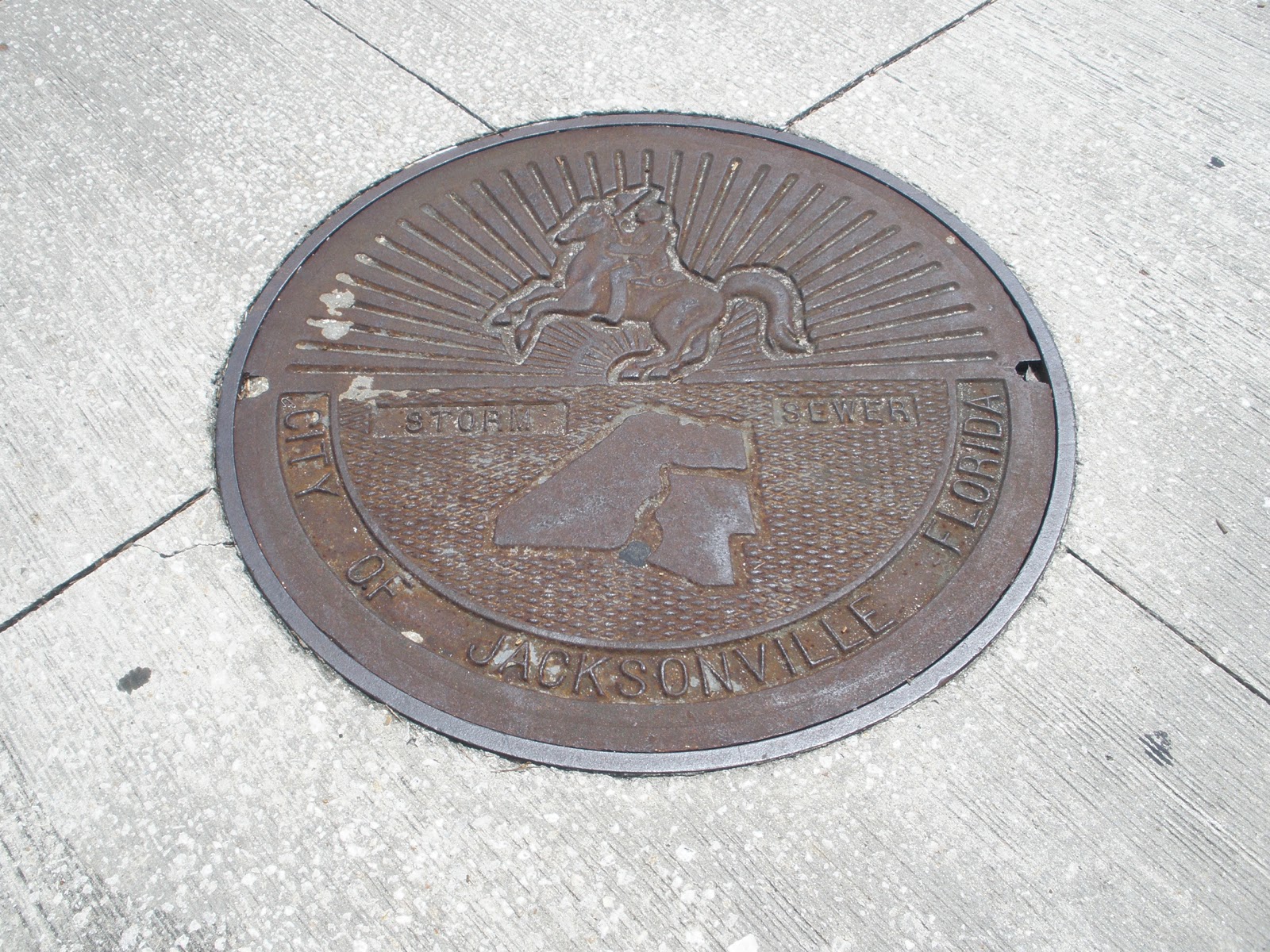 View along the Northbank towards the Main Street Bridge. 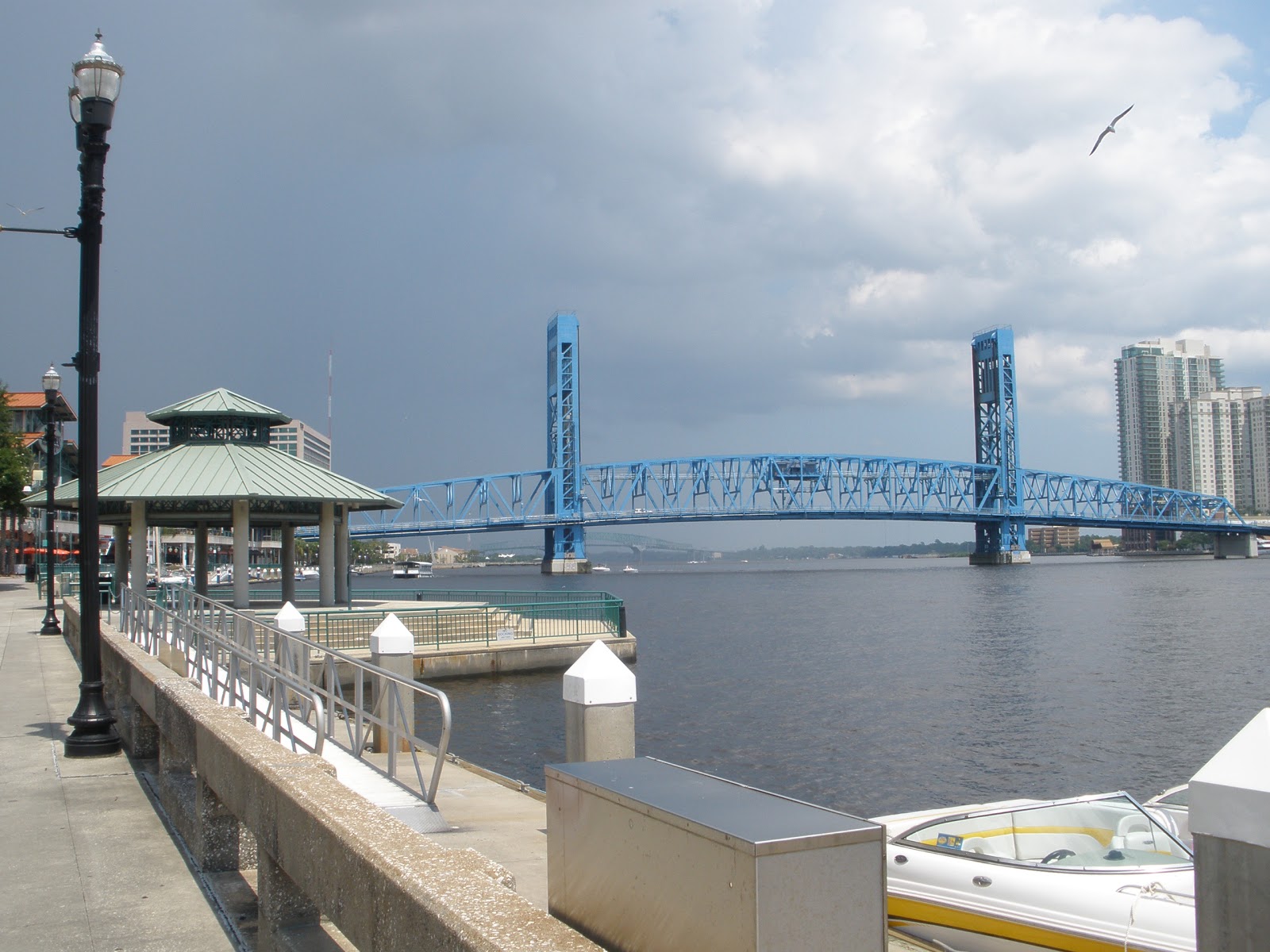 The sign on the Landing's pretty
Not huge, but not itty-bitty
Can't be right, or can it?
It's not Pizza Planet
Instead it's named for what city?

When we arrived at the Jacksonville Landing, a retail and restaurant complex on the St. Johns River in downtown Jacksonville, we easily spotted the the pizza place named after Chicago. 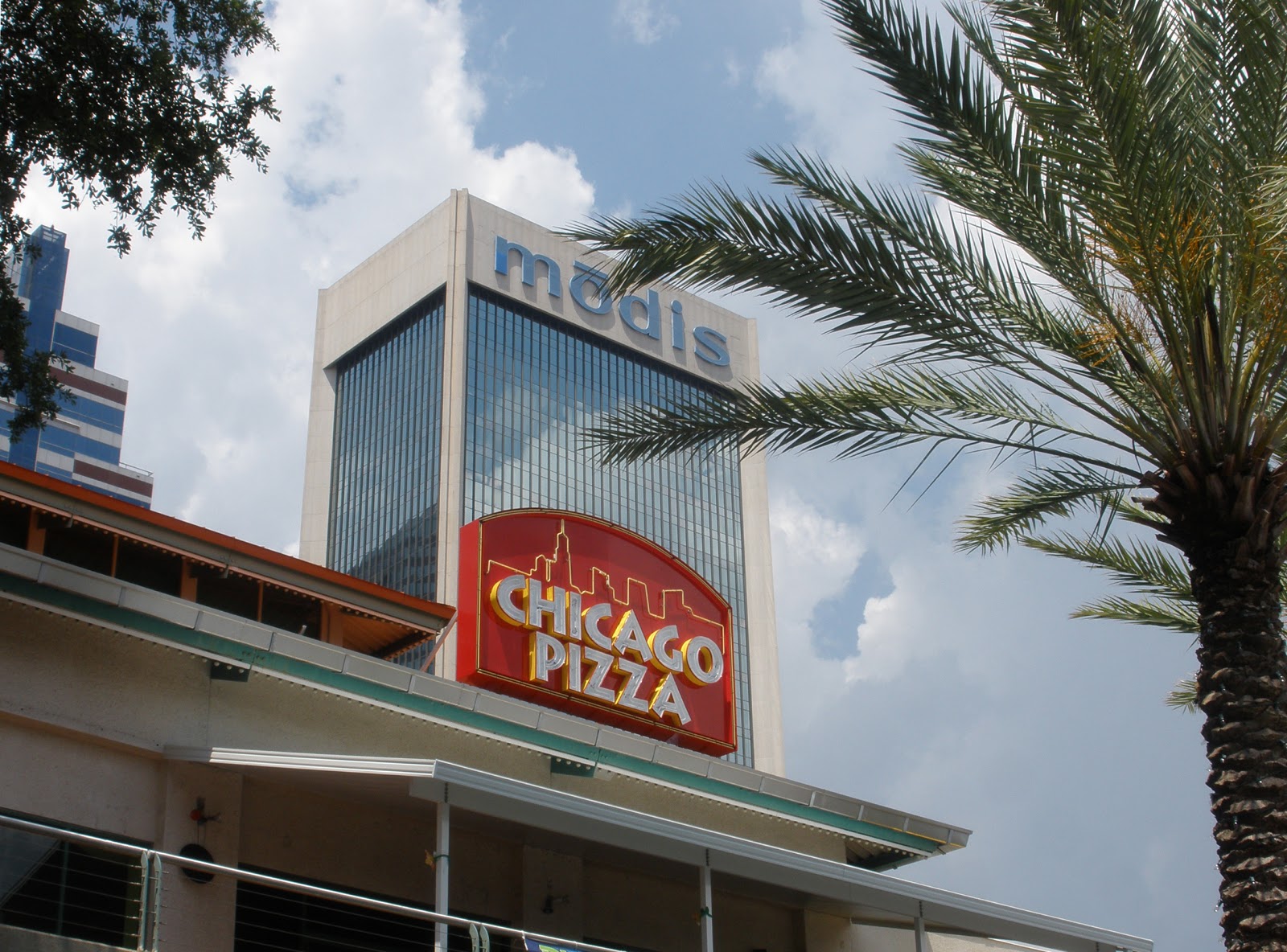 Clue number six:
There's a big green set of binocs
Look through them, you can see the docks
Lenny'd think it's funny
You'd pay so much money
How much cash before it unlocks?

The coin-operated binoculars had 50 cents printed on the coin slide, but the online entry form accepted only 25 cents as the answer. Or maybe it unlocks with a quarter, but you need the second quarter for time? (Lenny is a set of toy binoculars with feet.) 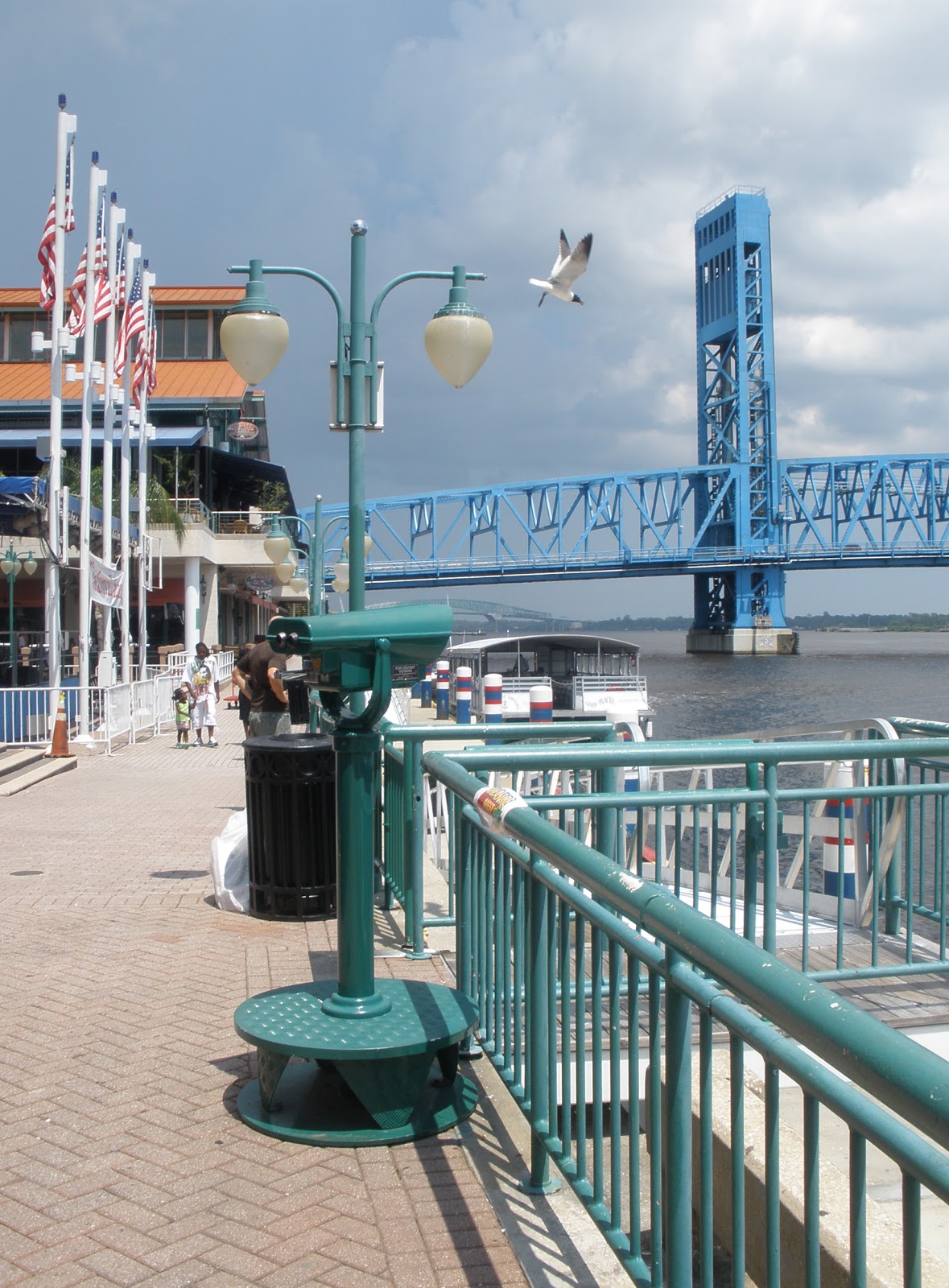 Clue number seven:
In the toy store window, hey, what's that?
It's a dinosaur wearing a hat!
It needs to be said:
Whose hat's on his head?
Dressed like that Rex couldn't scare the cat!

We continued past the Jacksonville Landing on the Riverwalk, but then made a u-turn to go through the shops of the Landing. The toy store had a "Treasure Quest" sign directly in front of the window with the dinosaur! 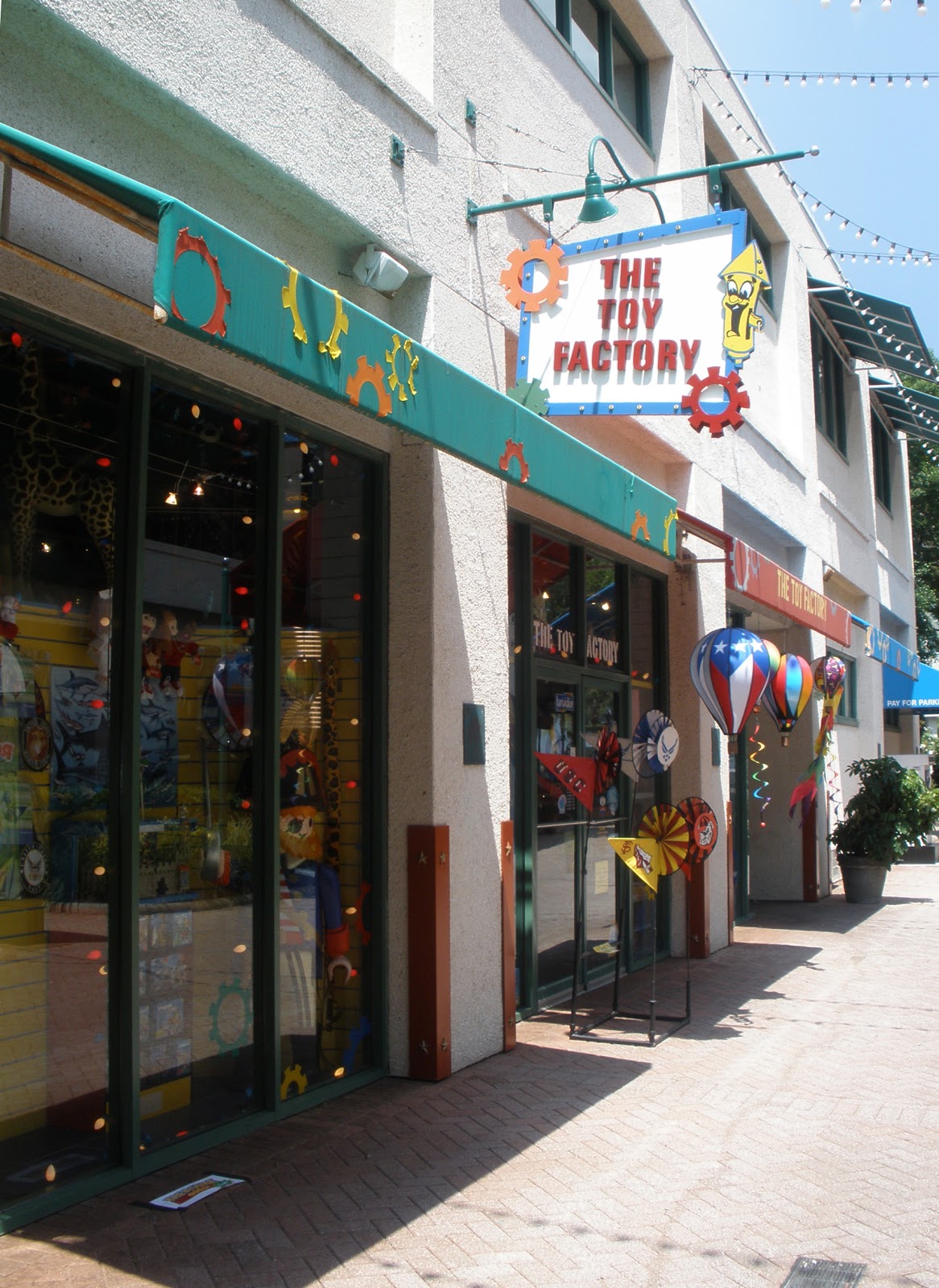 Rex was wearing Bo Peep's pink bonnet, and was even holding her shepherd's crook. 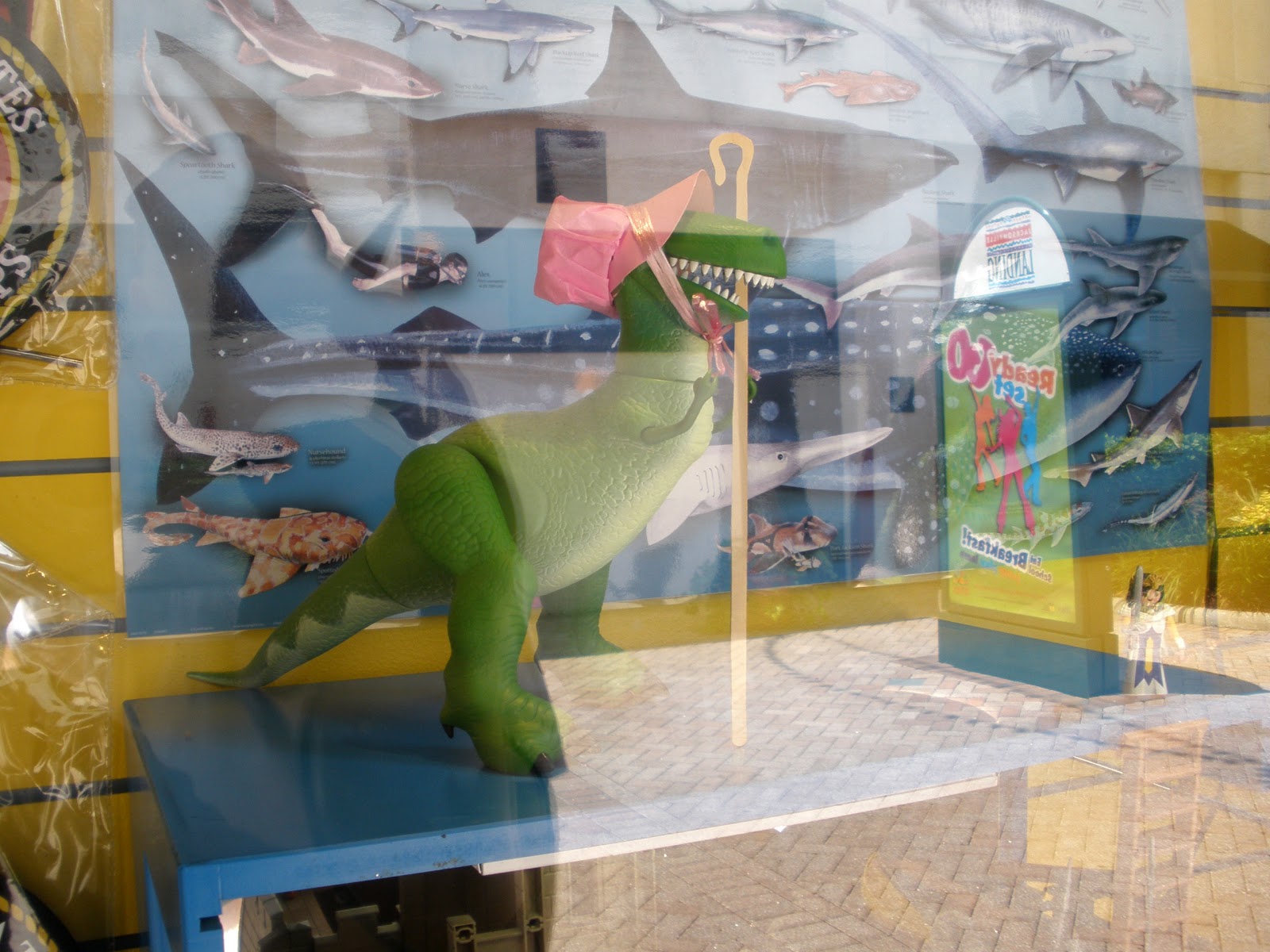 Clue number eight:
Face the fountain and reach for the sky
See the building that's five layers high?
What name could be better
Than the first four letters
That appear right before your eye?

In the center of the Landing, I stood on the "Treasure Quest" sign taped to the ground, which was turned slightly to the right. I took the photo directly in front of me. Thinking the "eye" in the riddle meant the letter "I", I thought the answer was L-A-N-D. 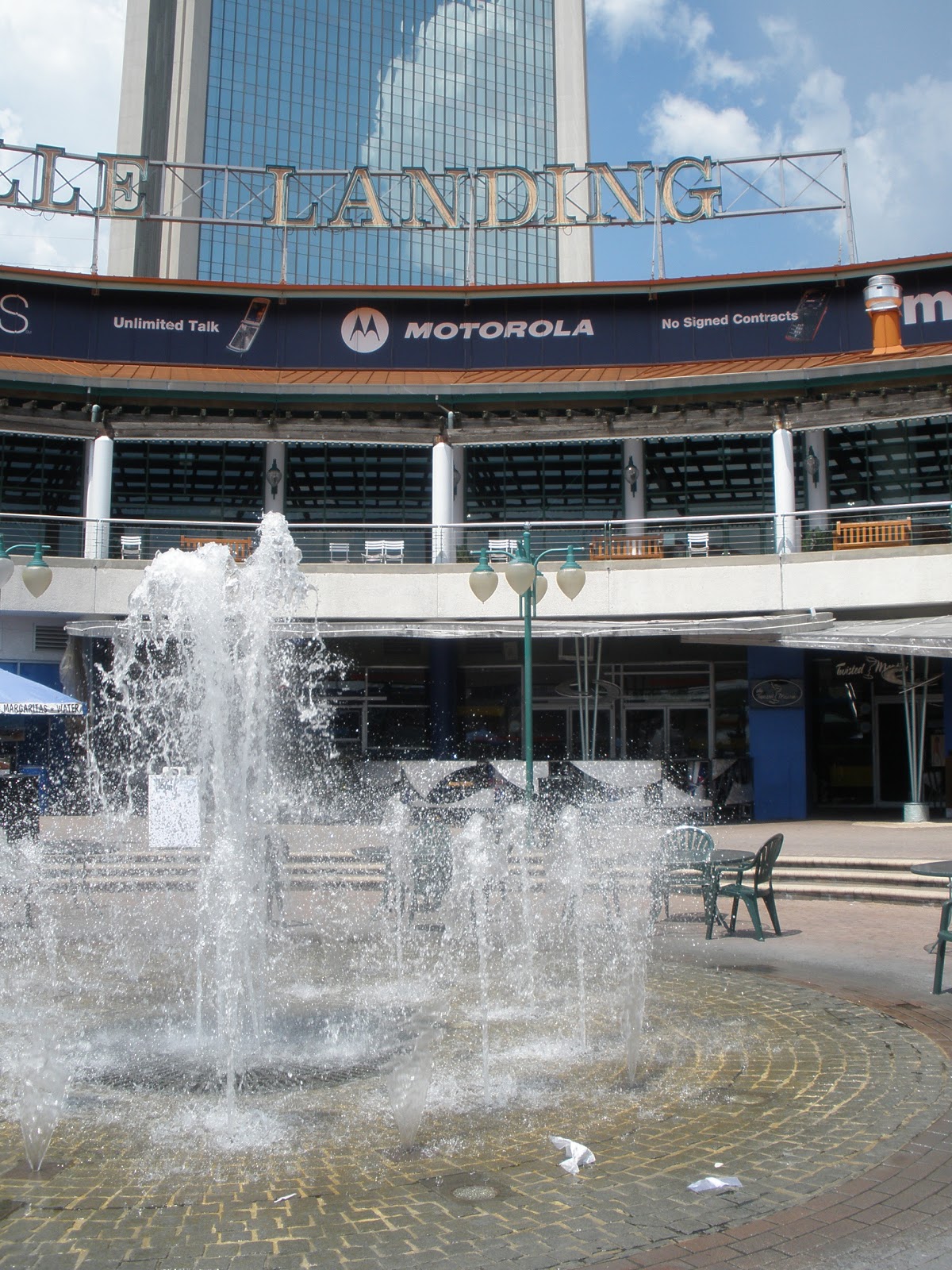 But the answer was J-A-C-K. 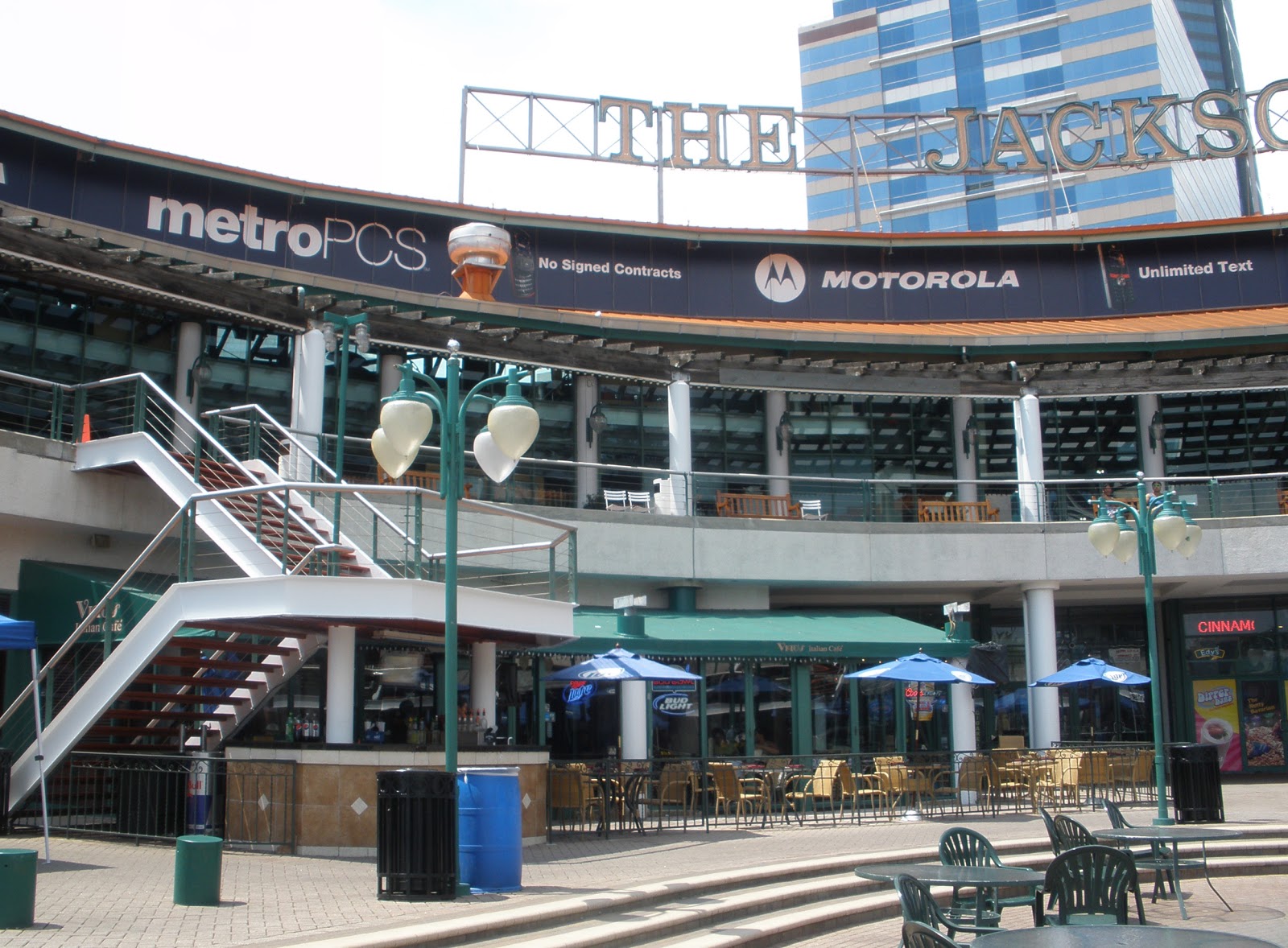 Clue number nine:
We just don't know what overcame us
Can one of you hockey pucks name us
The number on the plate
That comes from the state
Where Mr. Potato Head's famous?

Okay, we figured the next answer was at Sports Mania in the Landing, but we were thinking the plate would be from Mr. Potato Head's home state of Rhode Island. Turns out the plate is from Idaho. 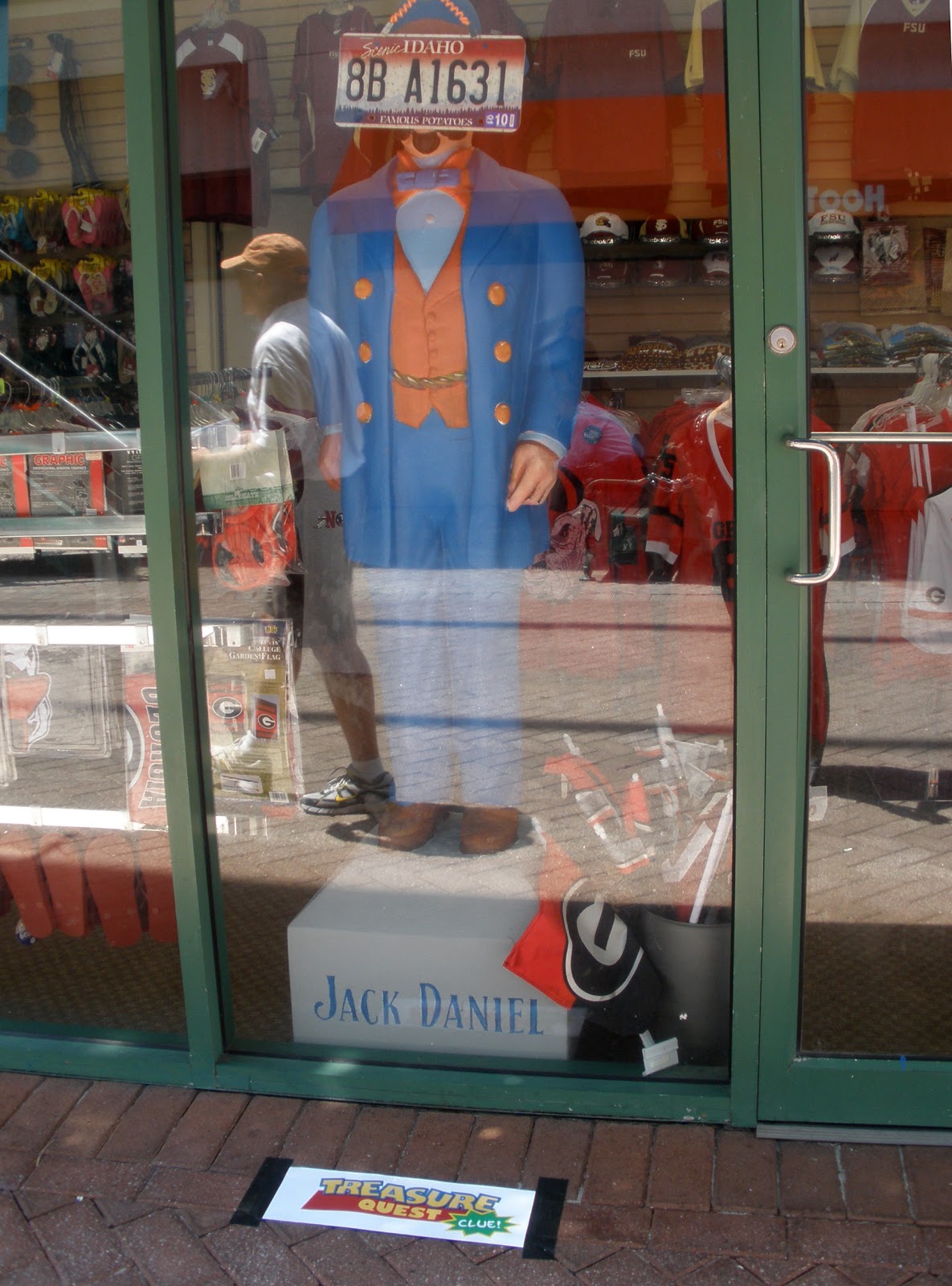 Last clue:
Jackson on his horse sure looks dandy
Here's one thing that sure would be handy
Which hand holds the hat?
If you tell us that
He can finally rest, right, Andy?

Just outside of the Landing is the statue that is seen on the manhole covers and in the city seal. So we already knew Jackson held his hat in his right hand. 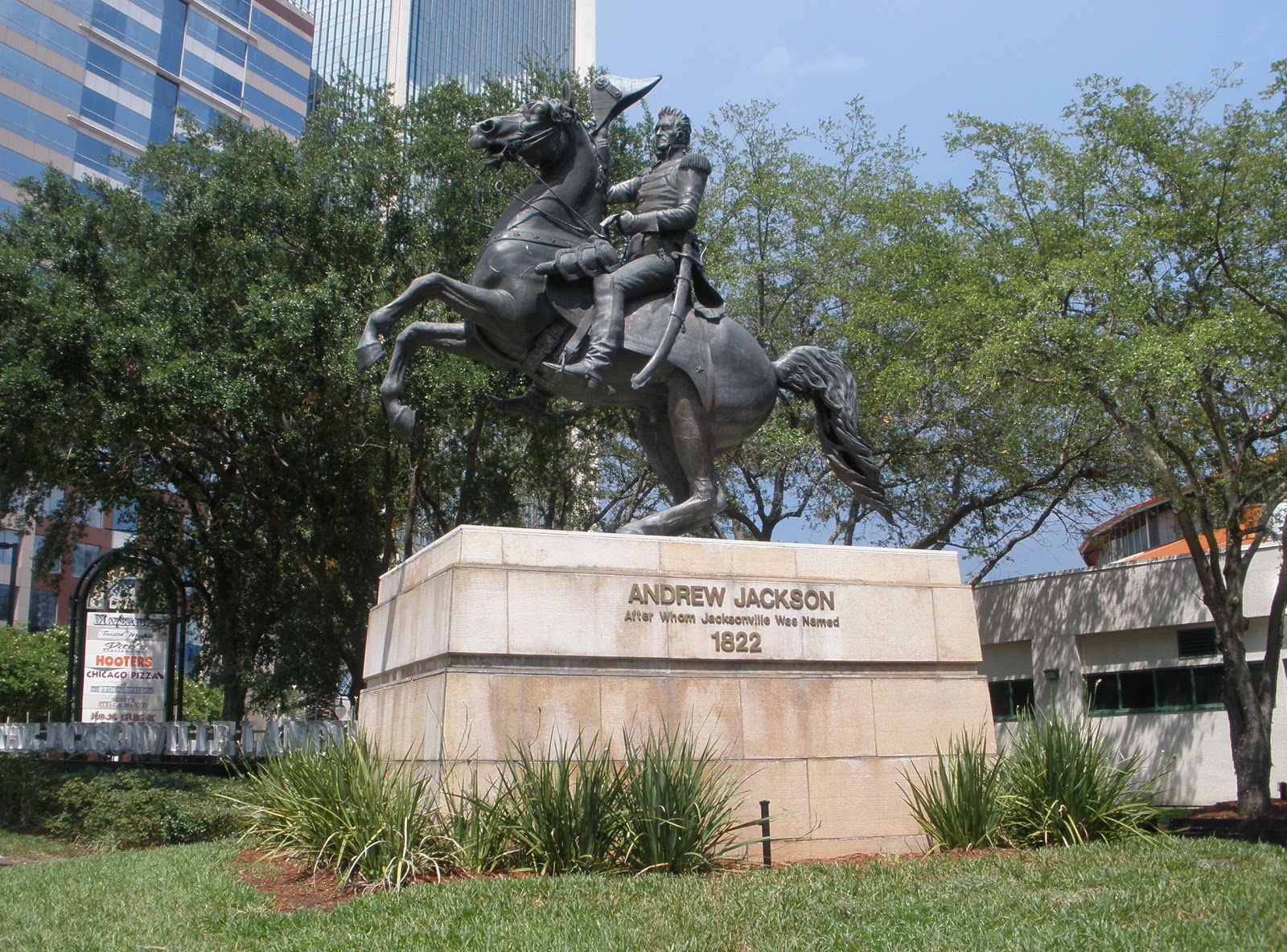 We headed back along the Riverwalk. The railroad bridge had been raised. 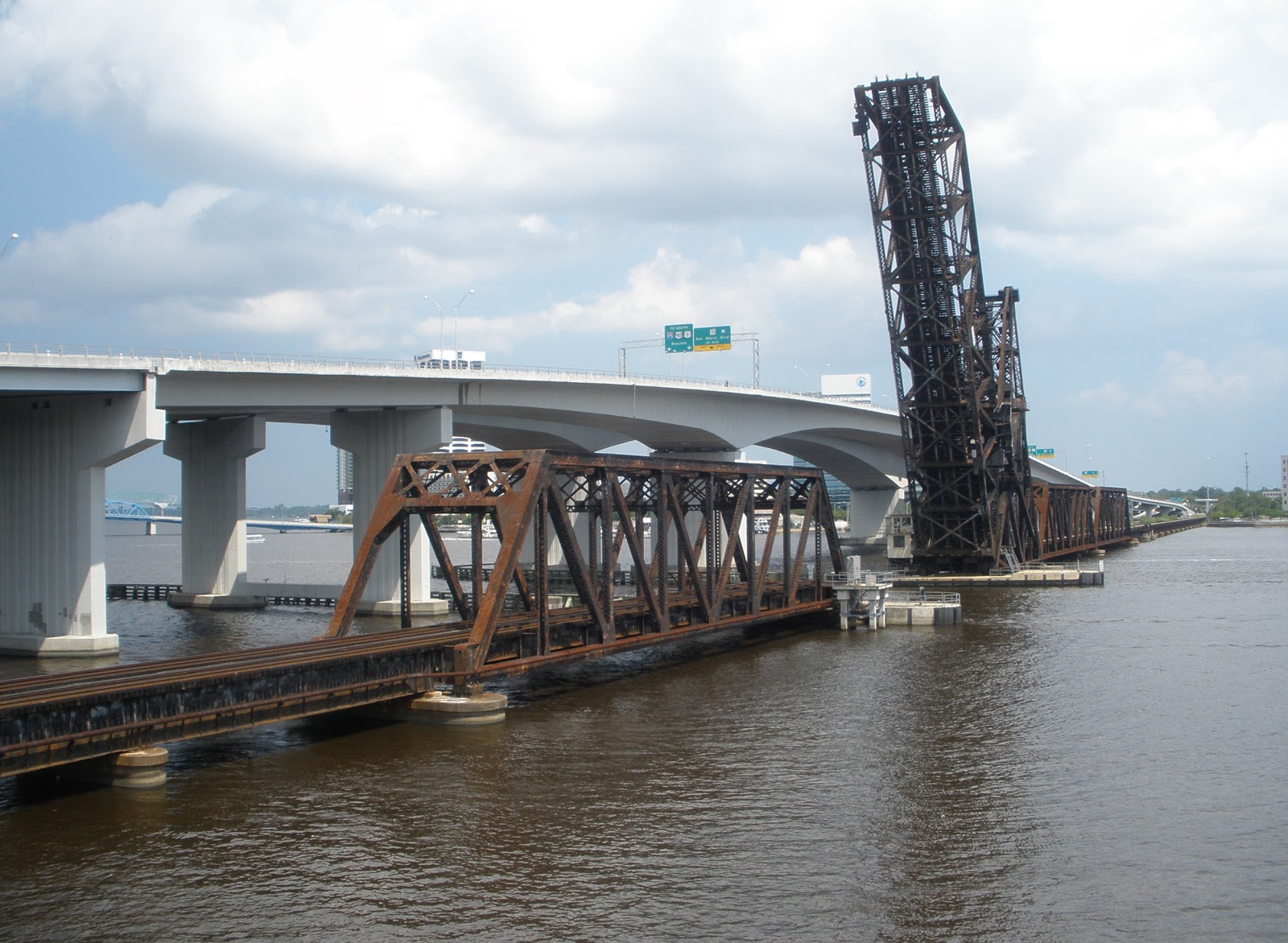 View west along the Riverwalk. 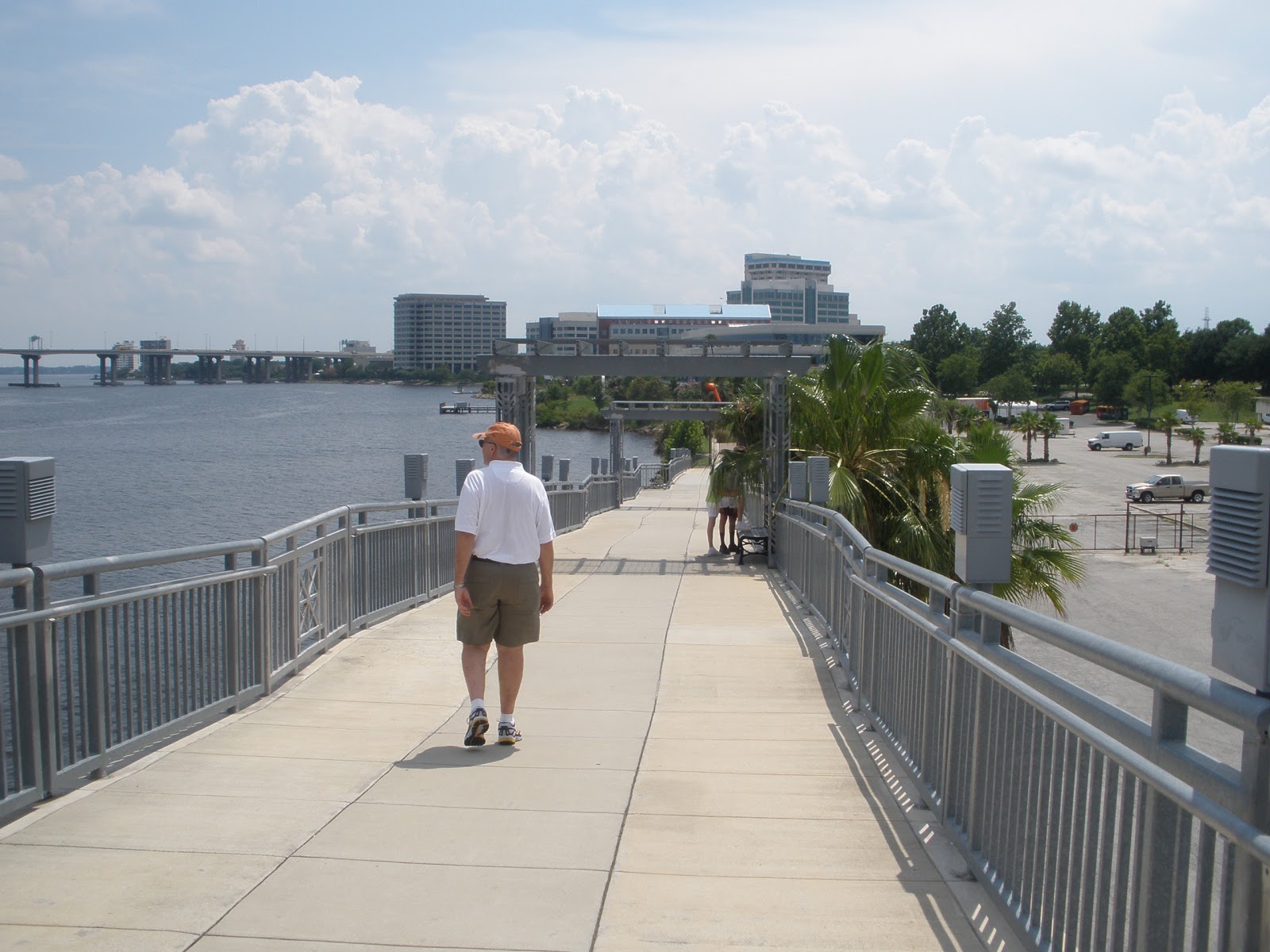 A bicycle stand on the Riverwalk. 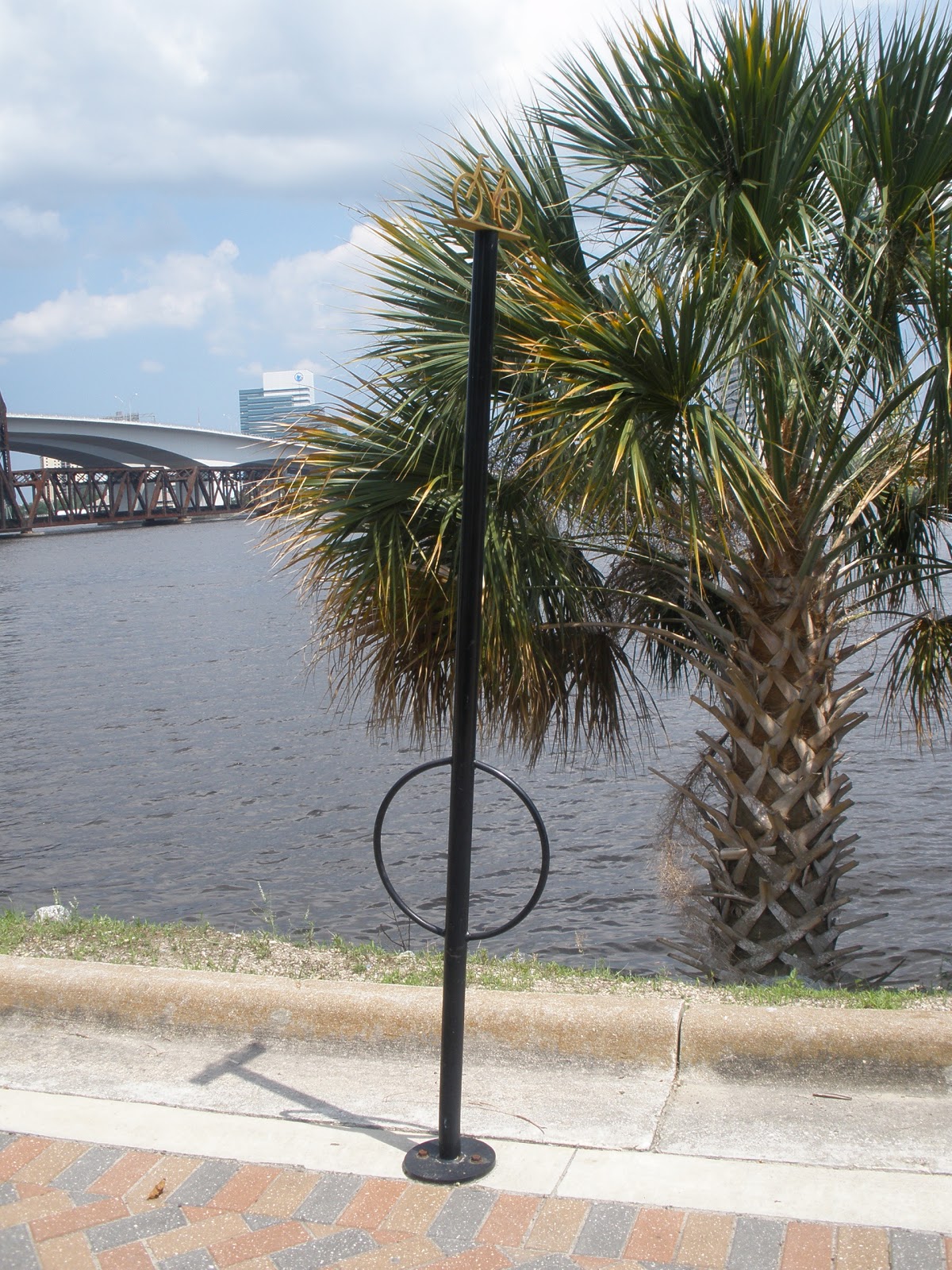 I'll let you know if I win the Treasure Quest! (Kent was able to spend the rest of the day doing what he wanted!)
Posted by Jax Stumpes at 11:31 PM No comments: