Wednesday, May 23, 2018 (continued)
From the Vyšehrad side of the Vltava River, we waited for a ferry.
On the left bank.
Staropramen was founded in 1869, and was nationalized after World War II. In 1992 it became part of the Prague Breweries group/Pražské Pivovary, and is now the second largest brewery in the Czech Republic. "In every glass of Staropramen lies the free spirit of Prague."
We stopped for lunch at another Husa restaurant in the complex. Afterwards we caught a tram.
We visited the Mucha Museum/Muchovo Muzeum, of the artist and designer Alfons Mucha. Mucha trained as a theatrical backdrop painter in Moravia, and moved to Vienna to continue that work but also for art education. He ended up in Paris for art studies, and derived some income through magazine and advertising illustrations. When he designed a poster for the stage play Gismonda, featuring Sarah Bernhardt, it was so popular that it was being stolen from kiosks. This led to a six-year contract with Sarah Bernhardt, and the poster became an art form.
We missed seeing Mucha's The Slav Epic, 20 huge paintings depicting the history of the Czech and Slavic people, which were given to the city of Prague in 1928. Last on display at Prague's National Gallery in the Trade Fair Palace/Veletržní Palác (the palace is under partial renovation) until 2016, The Slav Epic appears to now be in Brno. Or at least nine of the paintings are in an exhibit there. Then what? Hopefully plans to renovate space at the Lapidarium in Prague are followed, and The Slav Epic finds a permanent home.
Peter & Beth headed back to the hotel, and we caught a tram to our next destination.
Like the cannabis, absinthe appeals to many tourists because they cannot get it at home, and they do not realize that what they get here may not be the real thing.
The Strahov Monastery/Strahovský klášter was founded in 1143 or 9 by the Premonstratensians, a religious order of canons founded in 1120 by St Norbert. The monastery suffered under the Hussites and then the Swedes during the Thirty Years' War. In 1742 they were bombarded by the French. In 1989, the monastery was returned to the Premonstratensians and it continues as a working monastery.
No photos were allowed as we toured the Theological Hall (1679), and the Philosophical Hall (1782), both libraries to rival that of the Klementinum.
Back on the tram to Lesser Town Square/Malostranské náměstí. (Yes, Prague is made up of the Old Town, New Town, and Lesser Town along with the Castle District.)

We are still in Lesser Town Square, in the area that developed outside and down the hill from Prague Castle.

Although the sun was still to be seen, some rain started, but we kept walking.
After the counter-reformation, in 1624, the church was given to the Discalced Carmelite order. In 1628, Polyxena of Lobkowicz donated the statue of Jesus that became known as the Infant of Prague. The statue was credited for miraculous help during plagues and plunders, and became the object of pilgrimages. It was lost and then found, and when the monastery was abolished in the 1680s by Josef II, a group of English nuns cared for the statue. It was restored in 1879 and the Infant of Prague's healing powers and fame spread around the world. From 1939-1989, veneration of the statue was silenced, but the church was still a pilgrimage site, especially for those from Spanish-speaking countries. The Carmelites returned to Prague in 1993.

We returned to the hotel.
We met Peter & Beth and walked over to the commercial center of Anděl. Decided on dinner at the Pizzeria Ristorante Corleone, because of the "creative" gun sight. 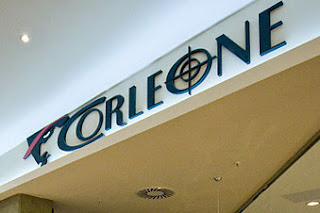 Today the high temperature was 75 degrees F.
Next: Prague 5a.
Posted by Jax Stumpes at 11:00 PM